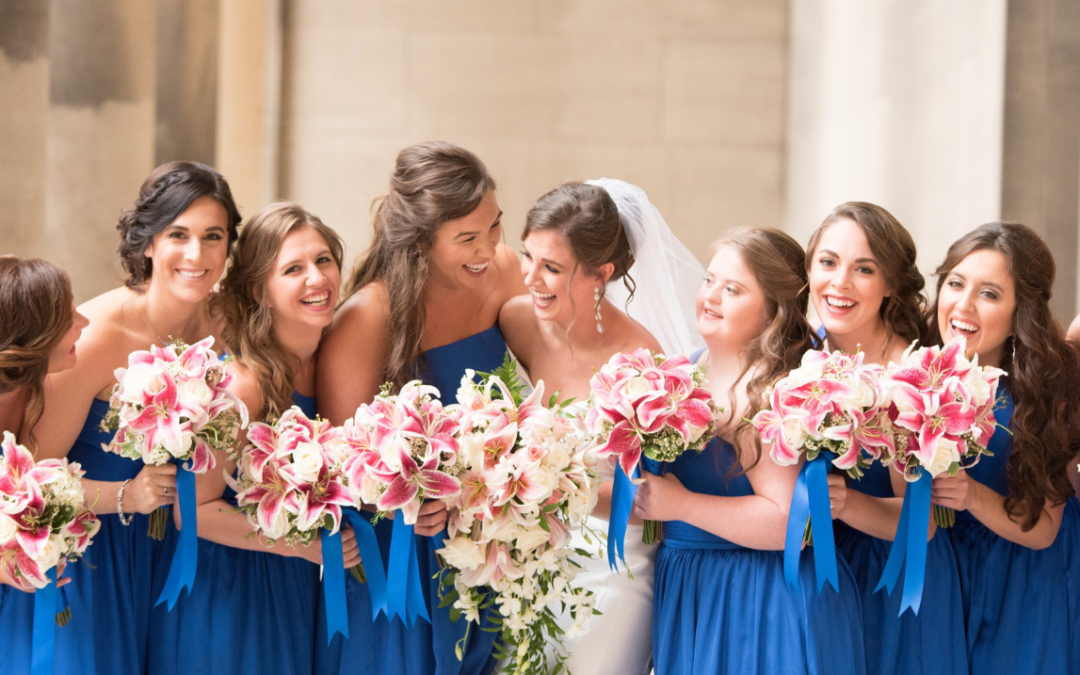 We all know that bridesmaids serve an important role – planning parties, wearing a (hopefully) beautiful dress, standing by the bride’s side, and supporting her emotionally through the entire planning process.  However, it might surprise you to find out that the history of the bridesmaids isn’t so glamorous.  In fact, the role of the bridesmaid and the bridal party has truly evolved over time.   So while the duties of modern bridesmaids might seem pretty daunting, they actually have it much easier than ‘maids of the past.

Whether you’re a new ‘maid or you’re like Katherine Heigl’s character in 27 dresses, it’s important to know the history of the bridesmaid to fully appreciate the role.

Bridesmaids have always “served” the bride

One of the most common references to the history of bridesmaids points to the Bible.  The book of Genesis tells the story of Jacob who married two women, sisters, Rachel and Leah.  At their weddings, both women were escorted by female servants – the bride’s maids.  During this time, bridesmaids weren’t necessarily family members or friends.  Rather, they were domestic workers who catered to the bride’s needs during the wedding day.  Obviously, bridesmaids today are selected based on their relationship to the bride, not because they work for her.

Bridesmaids were there to protect the bride

In ancient Rome, bridesmaids didn’t just attend to the needs of the bride, they also protected the bride from evil spirits.  In many cultures, a dowry of money, jewelry, furniture, or other valuables were presented on the wedding day; making the bride a target for robbers or thieves.  In other cultures, brides had to travel long distances (in a large group) in order to meet to her betrothed.   In either case, the ‘maids would all dress like the bride in order to serve as decoys and confuse rival suitors, evil spirits or anyone/anything else that had ill-intentions toward the bride.

Maid of honor was more than a title

Traditionally, the maid of honor is role held in high esteem.  They were supposed to be women who had a respectable standing in the community, someone who represented “fidelity and obedience” and upheld the qualities considered important in a wife, as a reminder to the bride of how she should carry herself.  More than just a close friend or beloved family member, this woman was a role model.  At one point in time (maybe still for some), the maid of honor was considered the bride’s favorite.  She was expected to be at the bride’s beck and call in the months and weeks leading up to the wedding.  Maids of honor were responsible for carrying the monetary portion of the bride’s dowry – also putting her at risk to thieves.

Today’s maids of honor are responsible for planning an amazing bachelorette or bridal shower and serving as the lead ‘maid for the rest of the squad; a far cry from where the role started.  Oh….and what’s the difference between a maid of honor and a matron of honor?  Not much, except the matron of honor is married, and the maid is not.   All other duties remain the same.

In the Middle Ages, bouquets of garlic and strong smelling herbs were carried by the bride and her ‘maids to ward off evil spirits and bad luck.  It’s also thought this was done to mask their own body odor since bathing was not a daily occurrence.  Later on, Queen Victoria carried a small bouquet of her favorite flowers on her big day.  This set the tradition we know today for brides and bridesmaids.  Oh…and while the bouquet toss might be a tradition that single ‘maids dread, you might be surprised to learn that a bride used to throw one of her shoes to the waiting crowd of bridesmaids­!!

A bridal party no longer has to be all female.

Until recently, wedding parties were divided by gender. Women were appointed bridesmaids and men groomsmen. These days, couples are choosing wedding party members based solely on their relationships.  Wedding parties now consist of bridesmaids, bridesmen, maids of honor, men of honor, even groomsladies and best women. This progression of the wedding party makes it much personal to the couple.  So buck tradition, mix it up & do your wedding your way!

Check out our blog on the history of the wedding cake for more on the origins of modern wedding traditions, or check out our blog home page for more tips, tricks & insight from your #WeddingPlanningCoach.
Like & follow SouthWind Events on Facebook and IG. Check out our website too to learn more about us.